Russ has toured with legends such as Engelbert Humperdinck, Freddie Starr & Joe Longthorne. He has cruised many times around the world including supporting Des O'Connor. He has also performed for Tony Blair PM and at venues such as The London Palladium, The MGM Grand and Caesars Palace Las Vegas.

"What a fantastic singer."

"Russ Williams is one the most experienced comedians in the UK."

"Russ handles varied audiences with such expertise, which others can only envy."

The Stage and Television Today

"Russ has learnt to adapt himself to every type of audience and all situations without a trace of foul language. That is a true skill."

Quote "Another brilliant night, good clean fun for over an hour, well done" 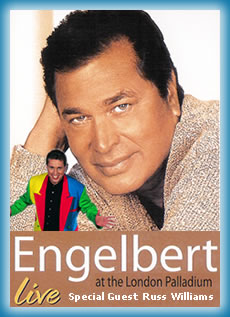